Nutrition 101: How much Protein per Day
Feb 4th, 2010 - written by Stephan in Nutrition

The recommended amount of protein per day is a hot topic, especially among strength training athletes, that is steadily revived by confusing recommendations in so-called professional journals and other media. Meanwhile, there are studies, one I will look at here in detail, that support my personal experience in terms of training, nutrition and muscle-building. But before that, let me clarify a few terms and issues around the subject of protein. 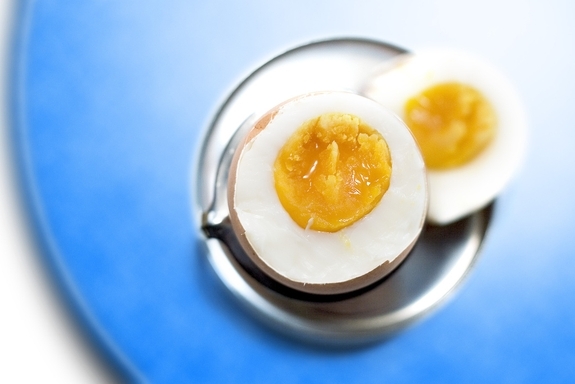 Proteins are usually denoted as the building blocks of life. They are composed of amino acids, which in turn are the basic building block of all cells in the body. In addition to the structure building tasks, amino acids are responsible for a variety of other bodily functions such as oxygen and iron transport in the blood, the formation of antibodies and the secretion of hormones. In short, no life without proteins. The continuous cell degradation and recovery processes in the body demand the daily intake of a certain amount of protein through diet. Even physically inactive people have to cover a basic need for protein.

As the level of physical activity increases, through an intense strength or endurance training for example, the demand for protein is growing equally, since the related metabolic processes of regeneration and adaptation of the body to the higher level of physical activity ask for more amino acids. But the disproportionately large amounts of protein, which are particularly recommended by many athletes, professional journals and the nutritional supplement industry, cannot be justified by that.

The "How much protein should I eat per day" table:

These numbers cover the daily need. The significant and deliberate exaggeration of the recommended amounts of protein for the particular activity level as well the amount of protein served per meal offer, according to a study mentioned on www.medicalnewstoday.com the University of Texas Medical Branch at Galveston, no significant benefits and even generate some unwanted side effects. Most of the excess is oxidized and could end up as glucose or fat.

The Right Timing and the Right Amount

Tests during this study have shown that the intake about 30 grams of protein per meal provides an ideal supply with amino acids to make sure the muscle synthesis. Among the volunteers who have taken up to 90 grams of protein per meal, no further increase in muscle protein could be demonstrated. Consequently the daily amount of protein has to be distributed fairly evenly among several meals throughout the day. Again, the researchers from Texas offer some interesting insights. Thus, the recommendation is to take in the first 30 grams of protein as early as breakfast and to cut the amount somewhat in the evening, as the synthesis of muscles functions most effectively during the day, while at night no significant amounts of protein can be processed.

Therefore the uncontrolled intake of large amounts of protein, especially in the field of strength training and bodybuilding, is just a curiosity. Replaced it by an intelligent handling of the own food and potential supplements. My own experiences has shown that an intensive weight training, which primarily targets developing strength and muscle density and not large muscular volume, is agreeable with a long-term protein intake on the level of an endurance athlete, that is below the mentioned 1 gram per pound body weight. Source: http://www.medicalnewstoday.com/articles/168876.php